These two legendary phone brands are one of the leading competitive brands in terms of sales and features. They became more popular because of their state of the art facilities and technology. Whatever phone you choose, these two phones have different great features. Basically, when you are about to buy which phone is better you’ll be thinking if how long it would last. 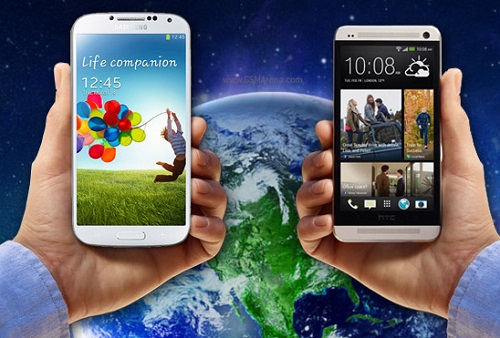 Here are some reviews about the dynamic functions of Samsung Galaxy S4 and HTC one:

Samsung Galaxy S4 is already available on April 2013 worldwide in 155 countries, at the same time it is one of the best seller brand smart phone for almost 10million devices sold out as of May 22, 2013. Samsung will be having sale on June 26, 2013 to U.S customers only. The Galaxy S4 will be releasing an active variant with a water resistant case and shock resistance. Samsung Galaxy S4 was considered as one of the top phone by the consumers because of its quality and multi tasking support.
HTC phone was commercially unsuccessful due to poor marketing efforts. For about two months delayed HTC phone sold around 5milion units of worldwide availability. Samsung produce its amazing smart phones while HTC provides its extremely ravishing HTC brand. It was consider as well as well-performing and extremely ruthless brand due to its inventive features and mean. HTC provides solid external construction improves toughness. They have focused their knowledge on camera rather than increasing its mega pixel.
The major distinction among the two is that Samsung phones are obtainable in every category whereas HTC phones are only under the category of smart phones. HTC contains 2300mAh battery which is already better compared to other smart phones with a lot of power-consumable because of its features but at the end of the day you will require to charge your phone mostly at night.  On the other hand Samsung has its best features when it comes to battery because it has 2600mAh battery. It has also the powerful features which can be charged wirelessly using Qi standard special charging pad which can be sold separately.
Samsung has its removable battery while HTC one is non-removable, so if the battery would spoil you can easily change it. The camera feature of Samsung and HTC has its significant capabilities so it is impossible to choose which is better in this aspect. Samsung also uses HD and Super AMOLED technology with the same resolution with HTC. Samsung has its larger screen display, at 4.8 inches compared to HTC which has 4.7 super LCD display.
Last of all, in choosing the best phones in the market nowadays, these two brands are one of the best, because they both provide superb products. Samsung has many things in favor as well as HTC. Any brand you choose will be better if you can handle it with care. I am not considering any brands as winner. I was expecting that this article would help you a little bit in choosing the best phone functions.

About the Author:This article is written by Mackenzie Sulivan, who is a professional blogger, freelance writer and guest poster. She writes about SEO and technology articles for many websites through online exposures. She is doing GuestPosting Service for 4 years already.